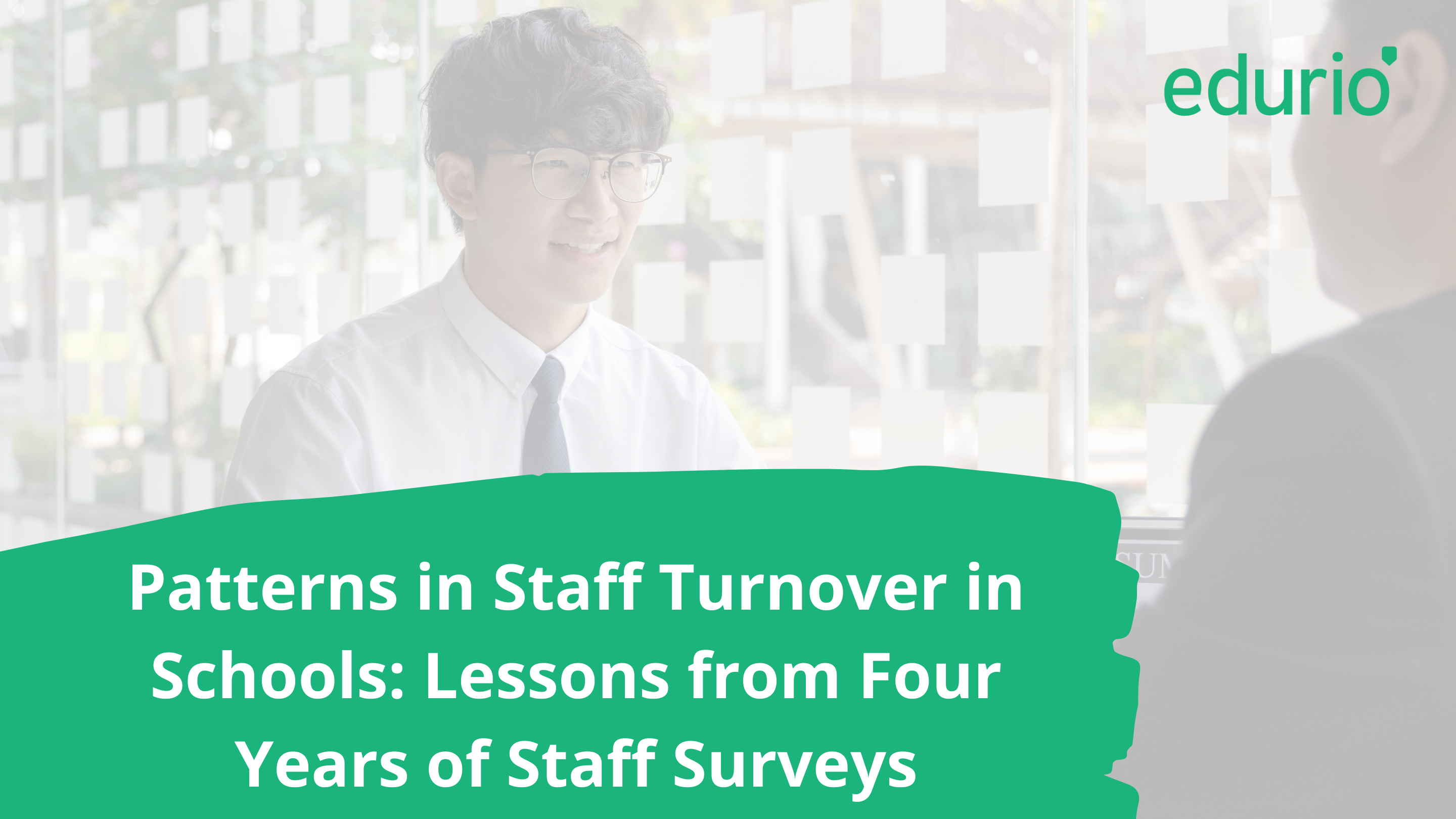 Patterns in Staff Turnover in Schools

Lessons from Four Years of Staff Experience and Wellbeing Surveys

In our latest report, Staff Retention in Academies: Experiences Before, During and After the Lockdowns we share the change in risk of resignation and other factors relating to the experience of staff in schools across the four years from 2018-19 through to this academic year, 2021-22. Based on feedback from over 75,000 surveys filled out by staff across this period, our report provides an insight into how the last four years have affected school staff. This blog summarises the key findings of our report and explores trends in school staff retention in the context of broader changes to policy and the labour market.

Firstly, we look at the risk of resignation, measured as the proportion of staff considering leaving their post in the school. We saw a significant decrease in the proportion of staff considering resigning from their post in the academic year 2020/21, followed by an increase in this academic year to levels higher than those seen pre-pandemic.

Over four in ten staff surveyed said they had considered resigning: sometimes, often, or constantly in the past three months, compared to around a third the previous year. In addition, 44% of staff considering resigning would intend to leave the profession entirely if they did resign; this statistic reveals that out of all staff surveyed, 18% of staff are at risk of leaving their profession entirely.

Looking closer at the data, this overall trend was seen across most staff groups, with the risk of resignation falling during the pandemic, then increasing significantly again.

There is some concern in the sector that school staff in lower-paid positions are looking for roles outside of schools. As Sam Freedman writes for Schools Week, “Being a driver for Amazon or similar is becoming increasingly remunerative relative to minimum wage posts in the public sector”.

Our data suggests this may be the case for traditionally lower-paid roles such as maintenance or administrative work. The proportion of staff in these roles considering resigning has increased more drastically than that of teachers and middle leaders, and a higher proportion of them are considering leaving the profession entirely. There was a smaller increase in teaching assistants considering resignation, but most of these (53%) speculated they would leave the profession entirely.

Despite being more likely to expect to remain in the profession than other roles, senior leaders saw the highest increase of all staff groups; the proportion increased by half during the last school year, from 21% during the pandemic-disrupted 2020/21 to 32% this academic year.

Concerns around school leaders have been well documented throughout the pandemic, from NAHT and the DfE to HeadsUp4HT and HeadRest working to raise awareness of school leaders' issues. In our 2019 report, we assessed the drivers of retention within schools and trusts in England. We found in this work that leadership dynamics significantly impact a staff member's likelihood to resign. An increased risk of resignation for senior leaders suggests there may be a knock-on effect in the coming years, as changes in leadership lead to changes in leadership dynamics.

Drivers of Staff Turnover in Schools

What's behind these trends? In the CIPD's analysis, The Great Resignation - Fact or Fiction?, Jon Boys outlines a variety of possible explanations. For one, it's possible that the pandemic gave people time to rethink their priorities and consider other paths in their careers or lives more broadly.

There was also a reduction in the number of people overall in employment in the UK. After 2020, when the UK officially left the EU and the pandemic took hold, some people (with citizenship elsewhere) returned to their home countries.

Analysis from the Economic Statistics Centre of Excellence presents data looking at the change in population during the summer of 2020 compared to the previous summer. Looking at the proportion of those employed during that period, we see a net decrease in the early months of post-EU membership and the onset of the pandemic.

But other theories imply that it is not entirely the fault of "The Great Resignation"; instead, "The Great Unbunching" may be responsible for staff resignation. Many staff resisted resignation during the uncertain period of COVID-19 and Brexit. Still, it would otherwise have been part of the natural turnover expected in any business - now they are taking their opportunity to leave.

If this is the case, this year’s increase in staff considering resignation could be a temporary reset, a backlog of 3 years of natural churn concentrated into one. The coming years will show which of these outcomes prevails.

Finally, the increasing demand may have motivated more people to change jobs, as unemployment rates have dropped to a record low. A “tight jobs market” could create better opportunities for job hunters, increasing turnover.

Reacting to Staff Turnover in Schools

However, it is clear that the retention trend this year is worrying and requires a response both from a market perspective and from schools and trusts.

Looking at the education sector in particular, the Department for Education has increased targets for Initial Teacher Training (ITT) to help the sector recover from an anticipated staff exodus following the pandemic, with the increased target being based on an expected increase in staff leaving the profession.

"The economic impacts of the COVID-19 pandemic led to increases in teacher retention, with the number of leavers in 2020/21 the lowest observed since the School Workforce Census began in 2010. We expect a post-pandemic ‘rebound’ in leaver rates, as some of those teachers that delayed their decision to leave service in 2020/21 will actually do so."

It is also important to consider efforts at the school and trust level to improve working conditions for staff. In particular, it’s worth considering leadership dynamics and workload. In our previous analysis Improving Staff Retention in Academies, we highlighted factors that most strongly correlate with the likelihood of staff resigning. In particular, we found that leadership dynamics in the school are the strongest indicator of staff retention, and heavy workload is a widespread concern among most teachers.

Working on strengthening school leadership, particularly in a time of leader burnout and increasing churn in this group, and improving the career opportunities, professional support, and workload amongst school staff remains the best way for schools and trusts to retain staff during this period of increased turnover.

Get a free copy of our Staff Retention in Academies Report by filling out the form below.